What is a coffin? What is a casket? Are there any differences between the two? If you’re asking these questions, you’re not alone. If you’ve watched a movie or a TV show, you’ve probably heard the term “coffin.” But what about “caskets”? Many people researching veteran’s services and funeral homes in Clarksville, TN want to know the differences, if any, between caskets and coffins.

The main differences begin in the details. Both coffins and caskets are burial containers used to hold remains of a deceased person for a funeral, wake, visitation and final disposition. In the United States most people use the more modern casket, but the choice between the two is ultimately the family’s or the deceased’s depending on final wishes and plans. Coffins also do not have hinged lids. Instead, they have removable lids that must be fully lifted. Unlike caskets, coffins have six sides and are wider on the top than on the bottom.

This tapered design was chosen to match the shape of the body as shoulders are wider than feet. The vast majority of coffins are made out of wood and are also finished with cloth interior linings, but they do not have exterior handles for carrying. In fact, any additional decoration or handles are not considered part of the coffin but are instead called “coffin furniture.” Traditionally coffin furniture is used to display the deceased’s wealth or status. The other big difference between caskets and coffins is price.

Caskets are generally more expensive as they have more decoration and use more elaborate materials. Coffins, on the other hand, require less material as the tapered shape uses less wood and thus lowers the overall price. A casket is a special box made to hold the remains of a deceased person. These boxes are made in rectangular shapes with four sides and hinged lids. Caskets also usually have handles that make them easier to life and move and can be used for both cremations and burials depending on the material. Caskets can be made from a variety of materials, but the two most common are wood and metal. 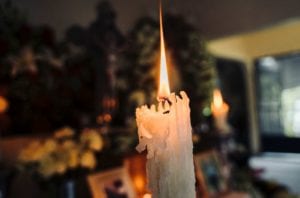 The average metal casket is made from stainless steel and the average wood from mahogany or oak. Most caskets are finished with soft interior linings to give the deceased a comfortable place to rest. It is important to note that it may be hard to find a coffin manufacturer as they are not in style and not as popular.  At the end of the day, the differences between caskets and coffins don’t matter even though they are very similar.

Sykes Funeral Home & Crematory is a Clarksville, TN funeral home that specializes in veteran’s services. We can offer you additional information on caskets, coffins, and other funeral services to help you plan a service that will honor and remember your lost veteran. Call today to learn more about what we can do for you in your time of loss. We are proud to be able to help you in any way we can.